This is a marriage made in heaven…Banana Nut Bread meets Cinnamon Rolls. The “roll” portion of the cinnamon roll contains all the wonderful flavors of a slice of banana bread and the traditional rolled up dough is loaded with bananas, cinnamon and sugar in the inside.

There is no doubt when you see a cinnamon roll you know what it is. Cinnamon rolls go by many different names. Some refer to them as cinnamon buns, sweet rolls or even a danish.

The ingredients for cinnamon rolls are what are referred to as usual pantry stables and/or baking stables. There is nothing that can not be found in your local grocery store.

1. Use a Bread Machine

This dough works well in a Bread Machine. It is an easy alternative if you have a busy schedule and do not have the time for mixing the ingredients, kneading the dough with your mixer or by hand and then wait for the dough to rise before starting to construct your cinnamon rolls.

No worries it you do not have a bread machine. This recipe can be adapted to using a mixer. Please note, these is a “wet” dough” and will take a little longer to mix and knead do to the moisture.

2. Use a Crafting Mat

3. Use a Serrated Knife or Non-wax Dental Floss

Using a regular kitchen knife can sometimes make uneven cuts, smooch down the dough causing the filling to come out. A serrated knife allows for a clean cut with a slight sawing motion. Dental floss provides a clean cut. The floss is placed under the roll, the ends brought up, tied ounce , and then followed by pulling the sting ends until the dental floss cuts through the dough. 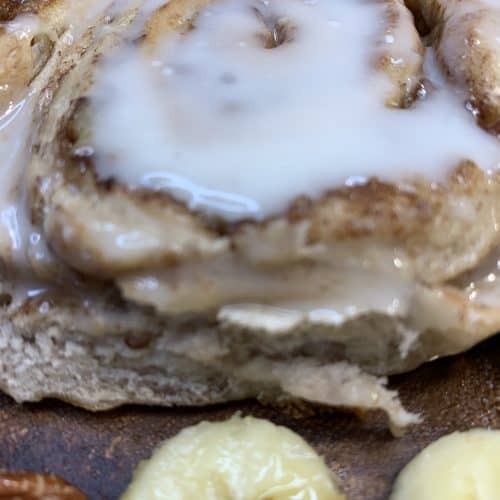 The Filling- Constructing the Roll:

These Banana Nut Bread Cinnamon Rolls are a crowd pleaser. What could be better than having having a slice of banana bread and a cinnamon roll all in one? These rolls are packed with flavor and each bite is OH YUM bite.