These magnificent Orange Raspberry Cinnamon Rolls are both a tangy and sweet. They are guaranteed to brighten your day.

In case you have not noticed, I like creating unique cinnamons rolls. I love cinnamon rolls in the purest form, but I also like to experiment with different flavors and change thing but a bit.

The combination of just the slightest amount of spices can take a recipe to a completely different level.

Fruit of all kinds are commonly added to desserts. We all have our favorite fruit pie or cobbler. These desserts though have the fruit as the main star.

The fruit is not only in the center of the rolls, but the dough itself is flavored with the fruit, which makes the dough the star of the roll.

Ingredients Needed From The Pantry

The ingredients for cinnamon rolls are what are referred to as usual pantry stables and/or baking stables. There is nothing that cannot be found in your local grocery store.

1. Use a Bread Machine

This dough works well in a bread machine. It is an easy alternative if you have a busy schedule and do not have the time for mixing the ingredients, kneading the dough with your mixer or by hand and then waiting for the dough to rise before starting to construct your cinnamon rolls.

No worries if you do not have a bread machine. This recipe can be adapted to using a mixer. Please note, this is a wet “dough” and will take a little longer to mix and knead due to the moisture.

2.Use a crafting Mat

3. Use a Serrated Knife or Non-Waxed Dental Floss

Using a regular kitchen knife can sometimes make uneven cuts, smooch down the dough causing the filling to come out. A serrated knife allows for a clean cut with a slight sawing motion. Dental floss provides a clean cut. The floss is placed under the roll, the ends are brought up, tied ounce, and then followed by pulling the sting ends until the dental floss cuts through the dough. 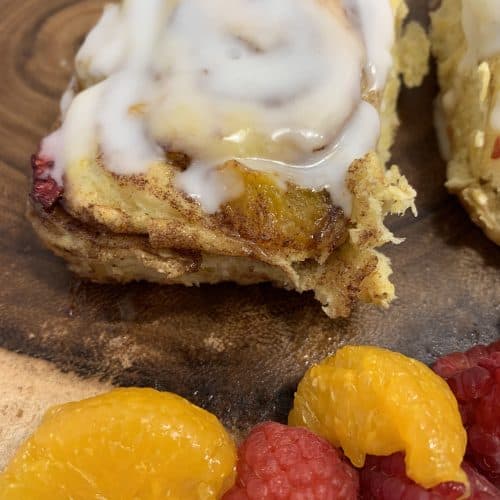 Preparing the Dough for the Filling:

With all the gooey goodness of cinnamon rolls, how do you know when the center is baked?

Believe it or not, you can do the toothpick test. The toothpick can be inserted into the dough portion of the cinnamon roll.

I know you are going to love these Cinnamon rolls. Please let me a comment with your thoughts about them.