GUARANTEED, You will not find a King Cake as Devine as this one in a local bakery. This King Cake is made with Bourbon Soaked Cherries.

What is Mardi Gras

Mardi Gras, is the last day of a period of time frame for celebrating what is known as Carnival. It is a festive season that occurs before the the liturgical season of Lent. This day is also known as Fat Tuesday. This occurs on the Tuesday preceding Ash Wednesday which is also 40 days before Easter.

The name Mardi Gras arose from the tradition of eating one last fatty indulgent meal before the beginning of the Lenten season on Ash Wednesday.

Mardi Gras particapants are said to be purging their souls of desires and preparing for the next 40 days ahead of fasting and repenting.

Masks are worn by party goers to avoid community judgement. The mask are said to hide their identity as they participate in partying activities of antics and indolences.

Where Did Mardi Gras Start?

Mardi Gras started in my families home town of Mobile Alabama in 1703. French settlers brought this celebration to Mobile. Mobile had the first Mardi Gras celebration in North America.

Mobile’s celebration of Mardi Gras was from its origin and remains today a family event where children participated in riding on floats and throwing Moon Pies and beads to the public watching the parade.

In 1830, the first masked parading society in America was formed in Mobile. This social organization group know as the “mystic society”, was responsible for coordinating parades and balls for the enjoyment of its members, guest and the public. The first parade that was formed was called the Cowbellion de Reakin Society.

In 1856, a few gentlemen from Mobile travelled to New Orleans for a meeting. The purpose of the meeting was for the gentleman from Mobile to assist New Orleans with starting up a secret society inspired by the Mystic Society in Mobile. New Orleans first and now its oldest krewe( Mistick Krewe of Comus)was formed from that meeting.

About the King Cake

Religious traditions are connected to the King Cake. The King Cake is symbolic of The Three Wise Men or Kings who followed a star leading them to pay homage to the Christ child.

The King Cake is a cross between a cake and pastry sometimes referred to as being a brioche-like dough that is swirled with cinnamon, cream cheese, topped with icing and colorful sugar. It is baked in a circle to represent a crown with jewels ( the colored sugar) with the shape. The icing has the colors of gold ( Gods power), green ( faith in Christ) and purple ( justice of God).

Within the King Cake there is a plastic baby which is symbolic of baby Jesus. It is said the person who gets the slice of King Cake containing the baby with have good fortune. 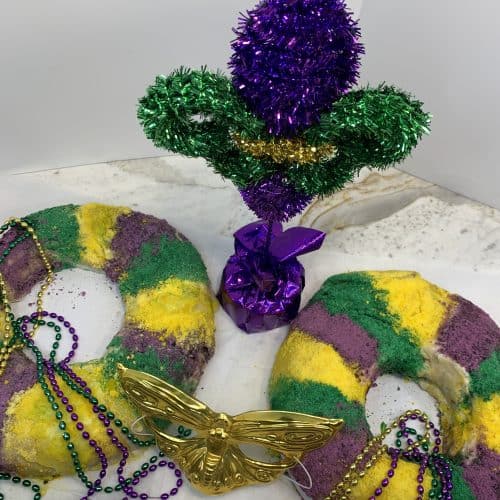 Print Recipe
Start your Mardi Gras celebration off right with a fabulous Bourbon Cream Cheese filled King Cake.This delicious brioche pastry is filled with wonderful flavor that is sure to please.

I hope you have a cup of coffee ready because you are going to want to dive into this fabulous King Cake right away.

Make sure you tell your guests there is a plastic baby in the cake or bean if you inserted one.

Please share in the comments your thoughts about this King Cake. And of course, I love pictures.

This error message is only visible to WordPress admins

Please go to the Instagram Feed settings page to create a feed.