John takes baked goodies to work all the time. One of the guys at work has been telling him that he makes the best German Chocolate cake EVER. Well, after many months of talking about his German Chocolate cake he as yet to bake and bring in to work. I told John that I should make a German Chocolate for the next treat that he takes to work. John learned that he had an upcoming birthday. I thought that would to the perfect time to make the cake.

History of the German Chocolate Cake

Many think that the cake originated in Germany with its name,but actually its roots lie in Texas. A housewife in Dallas developed the cake recipe in 1957 and her recipe was published in the Dallas Morning News. She named the cake after the kind of chocolate that she used in her recipe.

What is German Chocolate

Must German Chocolate be used in the Cake?

I believe the hallmark to a German Chocolate Cake is not so must the cake, but rather its filling and top frosting. The filling and/or frosting is a creamy custard like filling that contained coconut and pecans.

In honor of Mr. German( inventor of German Chocolate) and Mrs Clay ( recipe developer), I did not use The Ultimate Chocolate Cake recipe that I love, but developed another chocolate cake recipe using Baker’s German Chocolate.

Full disclosure… I am not a German Chocolate Cake kind of girl. I do not like coconut in desserts or in food. Coconut has only one place in my opinion… in fancy drinks that have an umbrella and fruit topping.

I believe my dislike for coconut is a texture thing since it is okay in beverages. 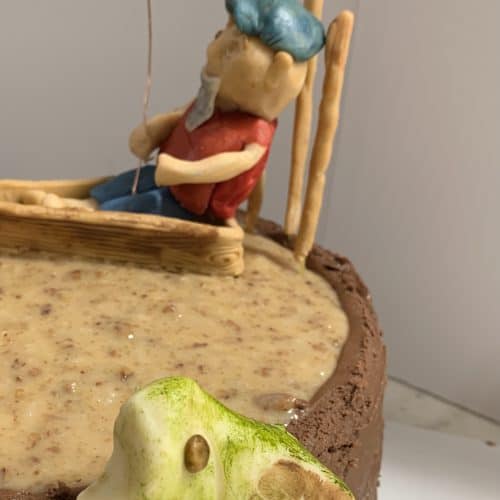 Usually, a German Chocolate Cake is topped off with the coconut and pecan frosting and maybe a dollop of chocolate frosting or heavy cream.

Modeling chocolate was used for the decorations. I made the boat, the man, and the fish out of modeling chocolate. After shaping the pieces by hand, they were refrigerated so they would harden.

Modeling chocolate is easy to work with in that it is forgiving. It is very pliable and easy to make shapes with. The downside, the warmth of your hands can quickly make it to soft and it can lose the shape formed.

Another great option for making 3 D designs is using fondant.Fondant is firmer and does not soften like modeling chocolate does right in your hands.

I personally like working with fondant, but prefer the taste of modeling chocolate…I guess who doesn’t because it is chocolate after all!!

If you are looking for a German Chocolate recipe, I hope you will give this one a try. Please leave a message in the comments and let me know what you think about the recipe. And as always, please share pictures of your German Chocolate Cake bake.