OH, THIS is not your traditional cinnamon roll!!

You have heard with potato chips that you can not eat just one, well the same applies with theses phenomenal cinnamon rolls. The first one, you are to busy with saying OH WOW, yum and you need a second one to take in all the things that make it so wonderful.

Can you taste the Bourbon ?

The answer is, that depends. If your cherries have been soaking in bourbon for a few days, you will definitely be able to taste the bourbon flavor when biting into a cherry.

If the cherries have been soaked for an hour or less, there will be a very subtle flavor.

Can I use something other than Bourbon?

Absolutely!! You can use an alcohol of choice ( Rum, brandy,etc.. ) or orange juice.

How To Make a Bourbon Cherry Pecan Cinnamon Roll 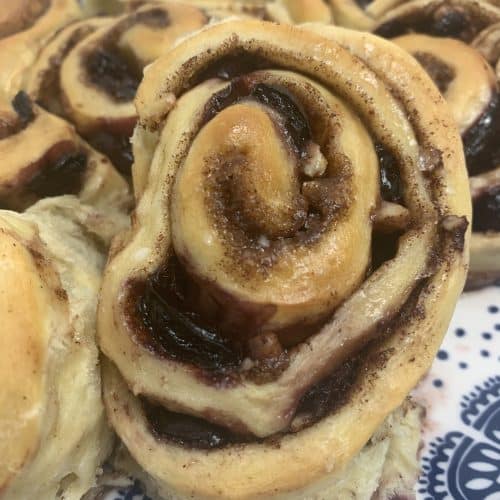 Print Recipe
These are not your traditional cinnamon rolls. They are a Bite of Heaven!! They are soft cinnamon rolls filled with pecans and cherries that have been soaked in bourbon. The cherries are a sweet burst of flavor that compliments a cinnamon roll.

For the Cherry filling:

What can be better than a warm Cinnamon Rolls in the morning with a cup of coffee? You can either bake them now and eat them, or store them to enjoy later. I would recommend storing them in an air tight container no longer than 3 days once baked. I really do not think they will last that long though 🙂

How to Freeze Cinnamon Rolls

This is something that I frequently do. I will double the recipe since they freeze so well and it is easy to have then available in short notice.

When wanting to eat the frozen rolls, remove them from the freeze and place on a plate to thaw out some and then microwave with short burst.

I hope you try these Bourbon Cherry Pecan Cinnamon Rolls. They are big hit with my family and friends.

Please leave me comments and picture of your cinnamon rolls

This error message is only visible to WordPress admins

Please go to the Instagram Feed settings page to create a feed.